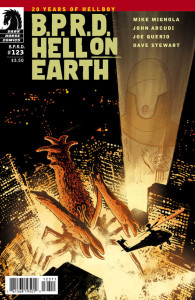 Giant Monster Throwdown.  Crazy Babbling Old Professor Dude.  And Tanks.  I dig it.  You’ve got this giant monster that reminds me of a King Kong/Godzilla hybrid taking on the giant… Whatever the hell those other giant monsters are.  And he’s kickin’ their asses!

Some solid monster on monster action here.  We get to see Johann in a tank blowin’ monsters up.  And my favorite line of the issue from Agent Enos: “But the gray guy… At least he had a face.”  Priceless.

The symbiotic relationship between Professor Kukyo and the “grey guy” was neat to see.  Though never fully explained, there was clearly more going on with those two.  I was sad to see Professor Kukyo go though.  I would have liked to have learned more about what he “saw” while he, or his mind/conscience, was floating around in that “other” place.

We got a bit more action in this issue than we sometimes get and I was just fine with that.  Joe Querio’s art made each giant monster punch resonate off the page.  You couldn’t help but root for the “grey guy” even though you knew absolutely nothing about him.  But he did have a face, and he did beat up the other giant monsters, so yeah, we liked him.

This is why I love BPRD so much.  You can have an all-out, giant monster fight, a half-crazed professor spouting quantum dynamics, a ghost in a containment suit driving a tank and shooting monsters, and a normal dude rooting for a big monster simply because he has a face.  And all of it makes sense within these pages.  Not many people can pull that off, but Mignola and Arcudi do it every single month.