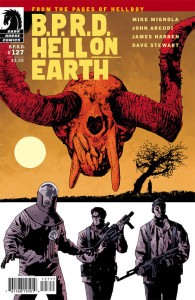 I’ll admit I’ve fallen a bit behind on my BPRD reading.  Never again.  Thank you Mike, John, James and Dave; for reminding me why the BPRD is one of my favorite titles to date.

Without a doubt, my favorite part of this issue is the Agent Howards/Gall Dennar story.  I’ve liked that guy since we were introduced to him back in the Abyss of Time story.  Don’t get me wrong.  I really enjoy seeing Johann maintain the calm in the eye of the storm that rages around him as he tries to keep his squad alive and on task wandering through the wasteland that is Utah.  But when Agent Howards comes riding into town stripped to the waist, covered in black soot, and looking like one of the Four Horsemen of the Apocalypse, that’s just a Bad Ass Moment right there.

When Howards flashes back (or mind trips, astral projects, slips into another mini coma, I don’t know how he’s doing it!) to Gall Dennar, that’s when things really start to pick up.  Clearly there is a connection between what was happening to Gall and his people and what is happening to Howards and the rest of the planet now, but damned if I know what that is.  But for me that’s the beauty of this book.  They don’t lay things out in a clear, linear fashion.  You have to think about what’s happening.  Pick up on the threads and bread crumbs they’ve left for you.  You have to use your bean a bit.  And that’s never a bad thing.

On a side note, that’s also why I like BPRD so much.  You can reread BPRD several times and always come away with a bit more than you did the time before.

Visually, this book rocks so hard.  James is in top form during the Gall Dennar parts.  So many fantastic images.  The completely weird yet amazing petrified forest of animals is damn creepy and cool all at once.  Just one look at the demon shepherd and you know that crazy lives there.  The giant horned eyed, multi-clawed, rubble backed, janky fanged monster is just horrific violence personified.  (Although I’m not sure it’s a person… Monsteronified?  Is that a word?  No, but I stand by my made up descriptor.)  The image of Gall’s friend Ando launching his spear is power, speed, action and heroics caught on the page.  And Gall’s re-emergence, even though it was expected, still is damn cool.

I know Mike and John have enough on their plate, but I would totally buy into a Gall Dennar miniseries… or two.  Just sayin’.

4 out of 5 Hyperborean Swords