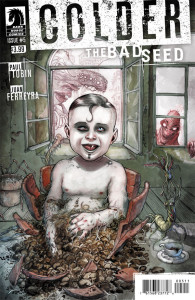 Well, I almost made it through this issue without getting creeped out… Almost.  Yeah, there are fingers flying off like some morbid Kayak commercial (have you seen that one?  I freakin’ love that commercial… Anyway.) But that’s not what did it.  Nope.  Two words; Finger Worms.  Dammit guys!  (Shiver.)

I do have to take my hat off to Paul and Juan for serving up a ton of answers and context while still keeping the action moving (and the fingers flying).  If you’ve been reading Colder from the beginning, then you’ve probably been wondering exactly what the hell is up with Declan.  Well, this issue brings us those answers.  And guess what; Swivel is at the heart of it all.  I really liked these flashback pages.  The washed out, color popped look was kind of cool.

I again have to at least tip my hat to the boys for making Swivel, while still completely creepy as all get out, come off as a major bad ass.  I mean, he’s always been a cool operator, slicin’ and dicin’ folk’s fingers as he saw fit, but this issue, he took quite a bit of damage and didn’t flinch.  I mean, the book opens with Reece wailing on him with a variety of flower pots and he’s no selling those shots like Hulk Hogan no sold Ric Flairs’ third reverse knife edge chop to the pecs.  (Sure, Hogan ate the first couple of shots, but that third one, he just shakes off and Hulks out.  Nope, not buying it.  And yes, I know that Hogan no sold almost everything for his entire career, so I could have chosen any example there, dammit, that’s Ric Flair!  He’s the man!  Say what you want, that dude was wrestling in the ‘80’s.)  Hell, Swivel no sells getting gouged in the eye with his very own finger-slicin hook knife.  (Now available from QVC! The Finger Slicin’ Hook Knife!  Order now and get free shipping and we’ll double your order! – Hot Damn!  Order up son!)  I mean a blade to the eye and he just smiles at him.

Oh, and the creeptastic part: Swivel on the pavement.  Not going to give it away, but those damn finger worm things are just, geesh!

Also, we get an origin for Nimble Jack… Sort of.  Just read it, you’ll understand. 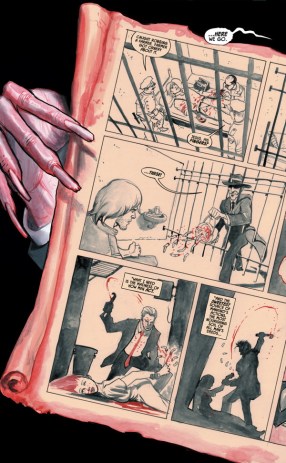 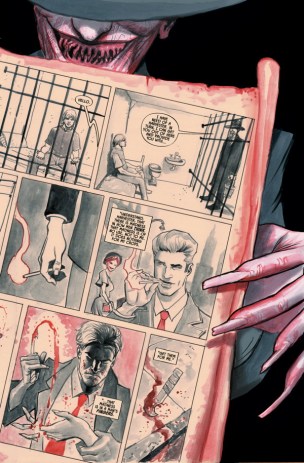