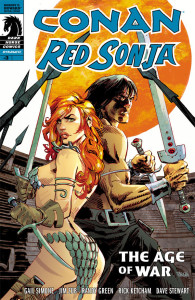 This is just flat out, pulpy goodness wrapped up in some really cool art.  What more could you ask for out of these two pulptastic heroes?  (Do I mean Conan and Sonja?  Or do I mean Gail and Jim?  The answer… Yes I do!)

Conan / Red Sonja is, I imagine, what some folks might call a “guilty pleasure”.  I would say those people have some kind of weird sense of guilt.  It’s fun.  And I don’t feel one bit guilty about me being pleased with this book.

-But Doug, don’t you think “Sword and Sandal” Fantasy is a bit droll?

Um, no.  No I do not sir or madam imaginary critic of my reading choices.  Besides, who says “Sword and Sandal?”  I always thought it was Sword and Sorcery.  And Droll? (Hold on while I Google “droll”….) Ah, gotcha… Nope.

-But the female is barely wearing clothes…

-And the male is a physically imposing lout.

Now wait a minute…Lout?  Ok, that might be accurate, but again, he too is kickin’ big ass.

-Are we to believe these two bandits are so skilled in the art of combat that they can easily defeat seven well-armed assailants?

-I still don’t see how anyone coul….

Just wait a minute.  Have you read Conan / Red Sonja?

You looked at the preview art and didn’t actually read any of it didn’t you?

That’s a yes.  Look at that first page.  See the looks of determination on their faces?

-They do look rather steadfast, yes.

But you can feel that they are facing uneven odds at best and yet from their faces alone you can tell they are bound and determined to succeed, correct?

-I do get that impression, yes.

Now turn the page.  That’s a hell of a splash page, yes?  Conan and Red back to back.  Conan has a chain, Red has a sharp stick…And they’re surrounded by seven warriors.  Doesn’t that just look cool?

-That would take a rather stout strength of character to stand up to those odds, yes.

But it looks cool right?

-I will say that is a rather striking image, yes.

And after the fight, where’ they’re standing over their fallen foes (looking pretty bad ass in their victory I must say), and Red Sonja hurls the trident into the chest of the King that put them in the pit in the first place… You have to admit, that’s some ballsy move right there.

-It wasn’t your typical end to a disagreement, you are correct.

And as we move on we see Conan, or as you call him, the “physically imposing lout” looking rather forlorn right?

Got it in one.

-And she is lost to him?

Heartbroken?  Yeah.  He is.  He’s also a bit regretty over his violent past.

Don’t start with me.

-Let me guess…The fiery haired heroine “comforts” the brute with her physical charms.

-I knew it!  Wait… what’s that on his arm?  Eeww.  Oh, that can’t be good.  What is that?  Wait.  She isn’t going to cut off his arm is she?  She can’t cut his arm off!  That wouldn’t make any sense!  How are they going to… Oh, that can’t feel good.  I cannot believe he just did that.   How did that even get on his arm anyway?  Thoth-Amon?  Evil wizard type.  That seems like something a villain named Thoth-Amon would do…No.  He’s not going to make them… Seriously?  He wouldn’t.  Wait?!  That’s it?  But what happens?

-Fine.  This book does have its merits.

Damn right it does.  It’s super fun and looks really good while being super fun.

-Can I keep this?

Sure.  Knock yourself out.

Well that got out of hand rather quickly.  My point is this. Gail and Jim are delivering a really solid book with two iconic and charismatic lead characters.  And Randy Green’s art is rock n’ roll for the eyes. 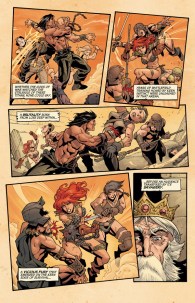 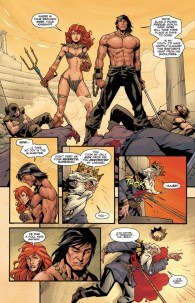 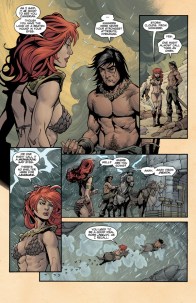