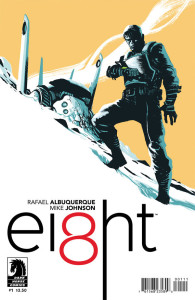 I have to give it up to Rafael and Mike for coming out swinging with a great big awesome-weird stick and just plain hitting out of whatever passes for a park in a game played with a great big awesome-weird stick.  I dig time travel stuff.  I dig post apoc stories.  I dig alt history mash-ups.  Eight is all of those and more than all of them all at once.

Eight number one opens with the splash page stating: The past is green; the present in purple; the future is blue; the Meld is something else entirely.  I absolutely love this opening and how it immediately plays out in the pages of the book.  If you check out the preview art below, you can see what I mean.  Rafael is making color an integral part of the setting.  We get to see a quite a bit of the future (the scenes with the blue background) and the meld (the scenes with the gold background), and just a glimpse of the past (that’s the green stuff… and trust me, it’s in there.)  Man, I dig that effect; it’s such a simple yet clever way to help the story along with those colors.

The Meld itself is pretty awesome, with a very Mad Maxian (now a word since I just wrote it) Post-Apocalyptic looking place that is apparently flush with dinosaurs.  I dig it.  I dig the way Renn and her troupe look.  Their red face paint looks really cool against the blue wash of the characters.  And the bad guy riding the dinosaur at the end (Oh, yeah!  There are dinosaurs!), The Spear, he looks completely bad ass!  (Bad guy or now, he really does look pretty cool.  Why is it that bad guys more often than not look cooler than the good guys?  Don’t get me wrong, Renn and her pack look pretty cool, what with their Mohawks and face paint and whatnot.  And even Joshua looks kind of cool in his space/time suit.  But The Spear!  He’s got a hood with armor and he’s riding what I can only assume is a war raptor.  I mean c’mon!  Dude is bad!  Wow, that was quite the parenthetical rant.  Sorry.)

Now, time to gush about the story; Mike and Rafael are bringing the heat.  We’ve got our intrepid explorer, Joshua, who is on a mission to somewhere/some when for parties at this time unknown to us.  He’s clearly using them to get something he wants (clearly a woman… it’s always a woman making normally rational dudes do things like hop into a time machiney type thing to run errands for professors in lab coats.) just as they are using Joshua for something they want.  And of course, something goes wrong and Bam! We’re in the middle of things and we don’t even know what’s happening, why he’s there, and where or when he is.  That’s a fun time right there.

I dig this book.  If you like cool stuff, you’ll dig it too. 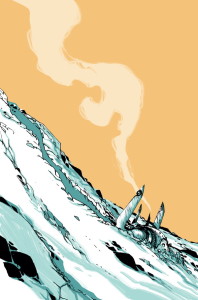 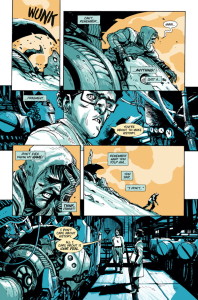 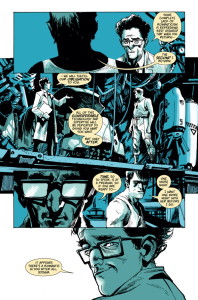 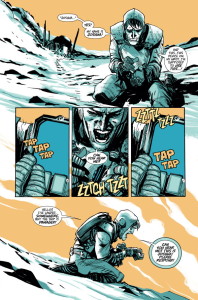 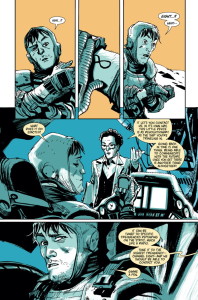