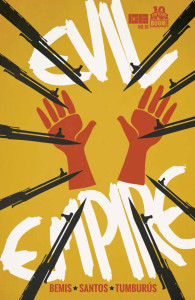 Man, Max and Victor show just how repulsively attractive (or attractively repulsive) evil can truly be.  I’m serious.  They show just how seductive even the most whackadoo ideas can be if properly positioned amongst society.

This is the issue where things start to really get tough on Reese and the rebellion.  It’s still kind of crazy to think that people who are fighting to have law and order restored as well as simple human rights and dignity are the “rebels”.  Crazy right?  While all kinds of shit hits all kinds of fans for Reese and her crew, we see what she is made of.  Bottom line: She kicks a lot of ass.

Sam, our fearless leader of the EE (that’s what the cool kids call the Evil Empire), has managed to gain not just loyalty in the states, but now has worldwide acceptance.  But, and here’s a big shock, he has even loftier goals.  What?  I don’t know.   You would think spearheading the New World Chaos like he has would be enough for one dude, but nope.  He wants more.  He’s also not above having a talk show host shot to appease an audience.

This book continues to be scary good, and I mean that on every possible level.  It truly is a quality book.  Max Bemis is on point with his writing.  The dialogue is crisp and believeable.  And in spite of the seriousness of the topic, I find natural moments of humor scattered thoughout.  And I just plain dig what Victor Santos is doing visually.  But it’s also damn scary how close to reality this thing could be.  The right guy, with the right stroke, in the right place, with the right plan, at the right time, and who knows what the hell could happen.  It’s frightening.  And that’s what makes this book so good.

5 out of 5 Clenched Fists 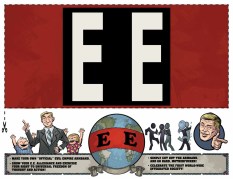 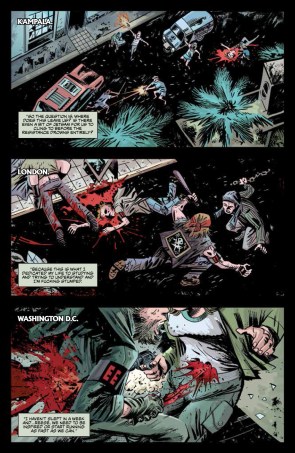 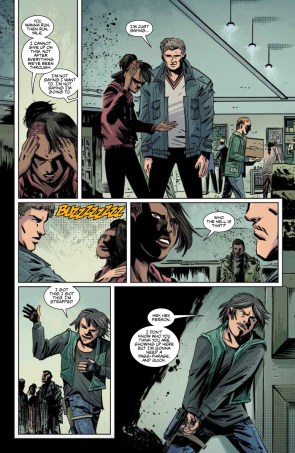