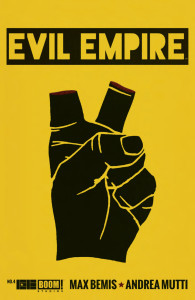 I finally got caught up with Evil Empire, and wow, I’m glad I did.  Writer Max Bemis has created a supercharged, weird, but frighteningly possible near future that takes you by the hand, leads you down the path, then, with both hands on your shoulders,  shoves you against the wall and says, “See this?  This could be your reality, so pay attention!”

Thus far we’ve had politics both subtle and blatant, a murder, music blaring the voice of the people, and honestly, a fair amount of jacked up happenings; and I dig the crap out of it.  This issue puts a most of cards out on the table for both our heroine, Reese and her dashing politician/soon to be President suitor, Sam.  It’s… it’s just, wow.  Some things I saw coming, but not everything.  This story is messed up in all the best ways possible.  Max’s story combined with Andrea Muttis’ art is brutal, and raw, and incrementally honest.  This is a flat out great story.

I’m a big fan of what Max is doing with music in this book.  With his musical background (he’s the driving force behind the band Say Anything) of course music plays an integral part of this tale, and it is.  As is often the case, one person song can personify the hopes, dreams, fear, anger, love, and rage of an entire population.  Unfortunately, too often those words fall on deaf ears.  Or those that hear them don’t understand them.  This is cool work.  Read it.

5 out of 5 Hanging Chads
(See, Sam wants to be President, and there was that whole election debacle in Florida with the hanging chads… oh never mind.) 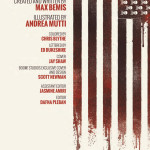 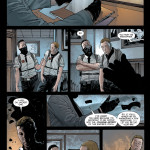 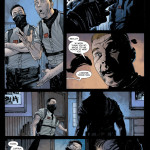 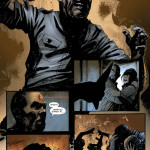 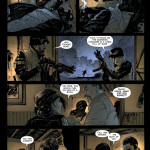