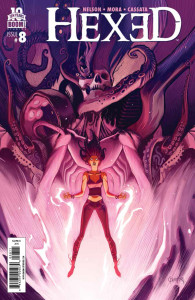 Wow.  This was just, wow.  The fun and games are over and Lucifer isn’t even bothering to take names before she starts kickin’ ass.

One of the many things I’ve really liked about Hexed has been the relatable sense of humor that Lucifer, and the rest of the cast, has been able to maintain throughout the course of their day to day activities.  The dialogue and banter has been extremely believable and genuinely funny.  That aspect of the story is gone in this issue.  And that’s awesome.  Because Val is dead and Lucifer is pissed.  She’s more than pissed.  She’s distraught, she’s heart broken, she’s empty, and she’s not kidding around anymore.  I mean at all.  She’s is done playing by any rules whatsoever and she is on a mission.  And hot damn, what a ride she takes to get there.

The fact that Michael jettisoned the humor for this issue is perfect and maintains the relatability of Lucifer as a character.  Because too often we see characters in comics behave in a way that while it may be admirable, it isn’t exactly believable.  In this issue we see Lucifer react how I think an awful lot of us would react when put in her situation and given her resources.  She has lost the one and only person who meant anything to her and she has no more shits to give.  Lucifer tears through this issue like a force of nature and it’s awesome to behold.  Her assault on Cymbaline is truly breathtaking.

However, like any natural disaster (or supernatural disaster in this case), there are bound to be consequences and repercussions.  The last page of Hexed #8 clearly shows that Lucifer has accepted, and quite possibly embraced, the consequences of her actions.  I have no idea where this is going, but things just got real for Lucifer and as a result, for everyone around her.

I’ve been going on about how much this story rocked (because it does) let me just say it looks amazing as well.  Dan Mora continues to deliver an amazing looking book that is able to keep pace visually with the dynamic story being told.  This is one fine book.

I don’t do this a lot, but I’m giving this one 5 out of 5 Pink Demon Bunnies 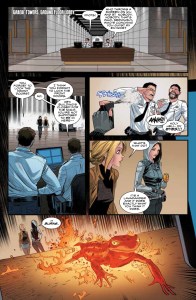 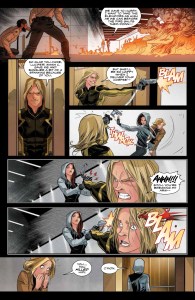 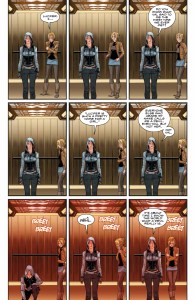