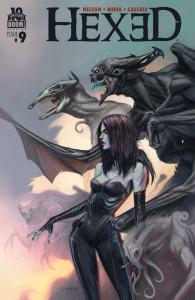 My review of Hexed #9 wherein I realize it’s totally ok for me to like Ace Frehley singing lead on Shock Me instead of Gene or Paul.  (Stick with me as I’m pretty sure this analogy makes sense.  It’s better than my original one which I may or may not share after this review.)

So, if you’re caught up on your Hexed reading, which you should be, then you know that our big hitters, Val and Lucifer, are basically off the board for now.  So this issue we see Raina and Bob take center stage, and I have to say, they really hold their own.  It’s always a risk making such a big change to your main character like Michael did with Lucifer.  He spent seven issues establishing roles, developing those characters and letting them all find their groove.  Then, Wham!  Things change.  But now with Raina filling the roll of team Captain rather nicely, it feels right.  That’s a credit to Michael for being able to slowly grow Raina’s character over the first eight issues to the point where it might be a bit uncomfortable for her to make that step to lead singer, she nails it.  Granted, I never imagined that Bob the body guard/door man would ever make the leap to side kick, but man, Michael really sells it and makes it work.

Speaking of making it work, let me just say how freakin’ pleased I was to see the ghost of Reginald, Val’s cat, turn into a complete bad-ass, demon-slayin’ beast.  Reggie wasn’t messin’ around.  The cat is a legit contender.

I’m crazy diggin’ Lucifer in her new role as The Thief.  She looks so bad-ass it’s spooky.  When Lucifer and Fastrada have their little face to face, it’s something to see.  So damn good.

Michael and Dan are putting out a really good supernatural book that just keeps getting better as it gets darker and darker.  And they do this with their big guns on the bench (for now at least).  So if you’re saying to yourself, “Yeah, I like Raina and all, but can she carry an entire issue?”  I say, “Let Ace sing the damn song!  He wrote it for cryin’ out loud!  Do you two have to sing every freakin’ song?  You let Peter sing Beth and Black Diamond, let Ace sing one!”

(OK, is Ace the best singer ever?  No.  But it was refreshing to hear that change up with him on lead vocal and he held his own.  Just like Raina.  Hey it’s better than my first analogy, which going to be that I liked the Midnight Express more than the Rock n’ Roll Express.   But that didn’t make sense because the Midnight Express were way cooler than RnR.  I know that was a stretch, but I couldn’t force myself to say I liked the N.W.O. B-Team better than the main N.W.O. roster ever.) 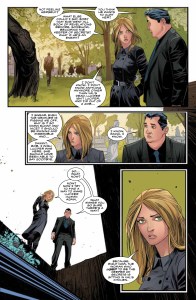 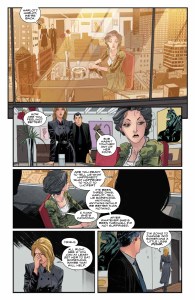 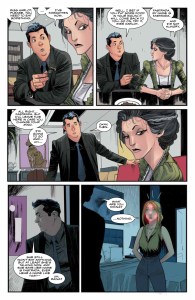