I can’t be the only one who got a Josie and the Pussycats meet James Bond on this issue am I?  If I am, I’m good with that.  (OK, that analogy only works if you swap out three piece all girl band for a one woman solo act, but still, she’s dressed up in cat ears and a tail and her name is Josie!  I mean, I’m not too far off here.)

I continue to love this book for all the reasons I stated last month.  (See HERE so I don’t have to repeat myself.)  Rock solid action; straight up amazing art; likeable lead character; this is all really good stuff here.

This issue is clearly the beginning of the pivot point of the story.  So far, what we know of Josie is she’s a hired assassin, and she’s really good at it.  This issue, we get to meet the Big Boss Man, Mr. Stenholm.  He’s the head of the Company.  This is where things start to get a bit hinky for Josie.  Even though she’s been with the Company for fifteen years (ok, we’re going to have to come back to that one in just a second.), Stenholm questions her dedication for all the reasons bosses back then (and sadly, even today, question the dedication of women in the work force), mainly she’s a woman with a husband and kids.  Stenholm has some hard questions for Josie here, like what is really important to her?  Her family or her work?  Clearly he’s implying that they are both affecting the other and that might cause one of them to not be around much longer.  He’s vague enough where it only comes off as a hint of a threat, but it’s definitely there.

By the end of this issue, we see why Stenholm was curious as to where Josie’s loyalties lie…it’s her next target.  I’m going to flat out say I have no idea what this company is or why it does what it does, but her next target (no, I’m not going to spoil it because read the book it rocks.) makes me question where Josie is going to come down on this one.  That’s the effect that cool, strong characters have on folks.  I’m two issues in and I’m already worries about the choices Josie is going to make on this next run.  Man, kudos to you Joelle and Jamie for making me care that much that quickly.

Now, let’s get back to this being with the company for fifteen years.  What?  How old was she when she joined?  I’m guessing she was just a teenager when she started working for the Company.  I’m not sure how old Josie is supposed to be, but given the era and what would have been typical, she can’t be more than thirty.  So she started with the Company when she was at the oldest fifteen?  Damn.  That’s the story I want to see next. 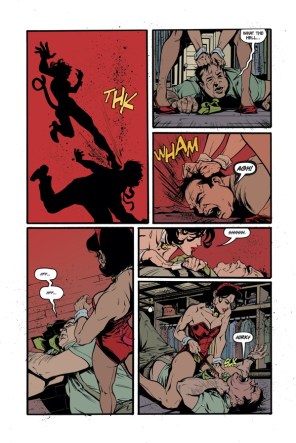 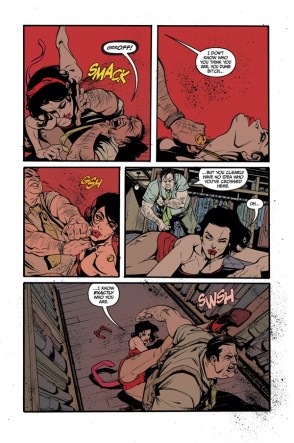