If Bewitched and The Long Kiss Goodnight had a baby, it could very well look like Lady Killer.  Or just take Bewitched, and swap out Samantha for the Gina Davis character and you’ve pretty much have it… kind of… sort of.  I’d watch that.

So we knew this was going to happen.  Josie has gotten herself noticed by the boss, and it’s not the good kind of attention.  Plus, her latest mission is tricky at best, because her next target is just a kid.  Things reach a critical mass during this issue where Josie has to make a choice.  But what she doesn’t know is that regardless of her choice, her boss has already made his.  Things are about to get very sticky for our heroine.  (Or is that Anti-Heroine?  I mean, she’s an assassin, so is she really a “hero”? Who cares?  I’m still rootin’ for her.)

Ok, time for a bit of some unsubstantiated conjecture on my part, because I just can’t help myself.  I have hatched this wild ass theory/backstory about Josie’s Mother in-law, Mother Schuler. (She would be the Endora/Agnes Moorehead character in my illegitimate TV mash up.)  This meddlesome, yet basically harmless woman is a retired assassin herself!  Bump, bump, buuuuummmm!  There’s just something about her.  How she’s always watching Josie.  How she reveals that she “knows” what Josie has been up to.  Oh, sure, Joelle and Jamie want us to think she’s just a nosy Mother in-law who is spying on the woman who married her son, but I know better!  It’s in her eyes.  (BTW, I’m pretty sure I’m way off on this, but I do get a perverse pleasure in having that little thought roll around the back of my mind while I’m reading Lady Killer.)

Lady Killer is one of the most aesthetically pleasing books I’ve read in a long, long time.  The opening page with the swingin’ party and the Tiki drink cups are rockin hard.  Joelle is nailing the visuals.  And I’m still enamored with that visual noise on the page.  It gives the nice crisp art a dirty, aged appearance.  Man, this is as great a book to look at as it is to read.

And the writing on this book is so solid.  I don’t mean the idea behind the story, or the plot, both of which are very cool.  But the dialogue is so perfect.  I love the barb that pink dress gives to Susan on page two, and the ambient conversation on the first page is priceless.  Joelle and Jamie know how to set a scene. 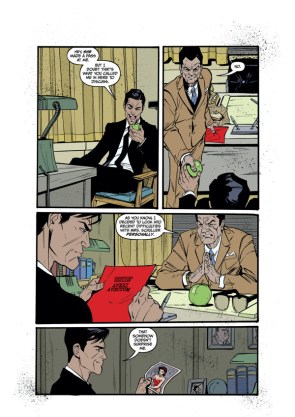 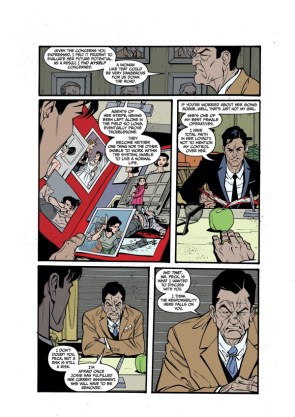