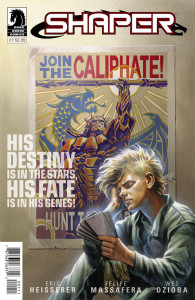 I do like me some sci-fi action, and that’s exactly what Shaper #1 delivers.

Eric puts all the pieces on the table for you to look at, ogle over, and whet your appetite for more in this first issue and it works.  I mean a race of shape shifters that pass down all of their learned forms to their offspring?  That sounds cool.  Of course these cool shape shifters, or Shapers, are not popular with those in power.  Unpopular may be an understatement.   Shapers have been nearly hunted out of existence to the extent that some folks think that Shapers are just a myth.  The things of legend.  (Obviously this isn’t the case, as we find out before the end of this first issue.)  But when we see them change shape, man, that’s pretty freakin’ cool.  So I’m in on that regard.

And of course the main Pro/Antagonist (depending on your point of view) is a complete bad ass by the name of Tor Ajax.  (Now that’s a name, son!)  I’ve said it before, I’ll say it again, I love a cool lookin’ bad guy.  Even the more plentiful shock troop baddies look pretty cool.  So yeah, I’m in here as well.

I’m even down with what I thought was going to be a bit too meta of a plot device, the card game Heroes of the Caliphate.  I tend to get a bit sketchy when it comes to self-referential hooks in comics, books, movies, what have you.  So when Spry was teaching a fellow student how to play this card game in the opening scenes, I wasn’t sure how I felt about it.  I mean, these cards are based on people and events in the story being told.  Tor Ajax is one of the cards.  But then, after I read a few more pages, it clicked and I dug it completely.  Of course it makes sense for there to be a card game like Heroes of the Caliphate.  In a world where Shapers are seen as the bad guys, for lack of a better term (since it’s not exactly defined as to how folks see Shapers in this world), of course you want a piece of propaganda that supports that view.  It’s actually pretty clever.  So yeah, I dig that too.

And I’m in on the art as well.  Felipe makes this first issue pop and look really good.  Tor Ajax looks like the bad ass he appears to be; the Shapers look cool in their new shapes (one turns into a freakin’ fire breathing dragon!  Hells yeah!);  And the space ships look cool and alien.  I don’t know if they would actually fly with that design, but who cares!  It’s cool lookin’!

So keep it comin’ boys.  I’ll read me some Shaper Space Opera Action. 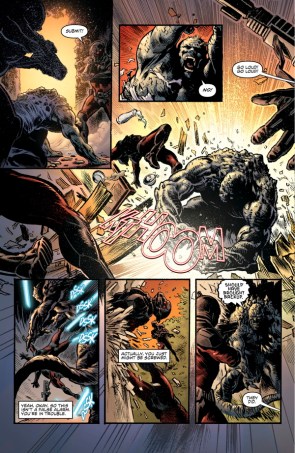 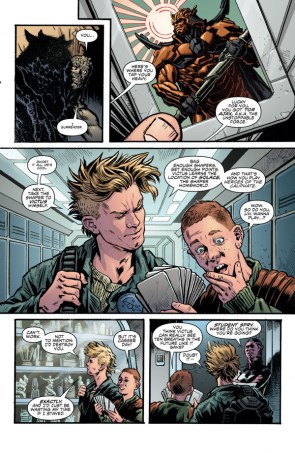