Remember those Magic Eye images that were all the rage back in the late ‘90’s?  They were just pictures of random colors and patterns, but if you looked at them just right, you could see amazing 3-D images pop from the page.  (At least that’s what they told me, I never could see those damn things.  Except maybe once or twice.  Pretty sure it was a cow.)  Even if you didn’t see them, the images were pretty mesmerizing and gave you the illusion of movement and I was never quite sure what it was I was looking at.  That’s what reading Sundowners is like for me.

Tim Seeley has taken the idea that “super-heroes” (the super heroes in this book anyway), are just normal folks with mental issues, and blurred that line completely to the point where I don’t even know what I’m supposed to think.  Are these people delusional?  Or are they really the only ones who can see what’s actually going on?  Are they “enlightened”?  I almost don’t care which is the “truth” of this book.  Either way, this has been a hell of an entertaining six issue ride so far.  I personally want them to be enlightened heroes who are some of the very few who can save us from a reality beyond our ability to perceive it.  But Tim does such a good job of sowing just enough seeds of doubt that I’m still not 100% sure even after reading issue six twice over.

Regardless of which reality proves true, this book continues to get better.  Sundowners is filled with super heroics, great action, solid art and some damn fine writing.  Crowlita gets some of the best lines ever, with things like “Shit sticks.” And, “This is how they do it!  The ignorant overwhelm the aware!  It’s like the internet!”  And of course, “Suck my ass, grandma!”  These are priceless and just a taste of the realism that Tim brings to this off kilter story.

Besides, this book makes you think.  (Or it made me think, at least.)  Tim and Jim have put a fun house mirror up to society and are showing us what is out there.  If we see a guy wandering the streets in a mask saying he’s saving us from the repitloids, of course we’re going to think he’s crazy.  But what if there’s more going on there than just the random rantings of a broken mind?  We tend to attack those that are different, we’re afraid of opposing opinions; we don’t want to be in the minority on an issue or topic because we fear we might be in the wrong.  But just because there are more of them than there are of you, doesn’t mean you’re wrong.  There’s a lot going on here beyond the “crazy supers” vibe.

Whether you buy this book for the art, the action, the on-point dialogue, the street level super heroics, the idea of supers are just crazy everyday folks, the commentary on society and personal choices and accountability, or just because you just like the title of this book, you should be buying this book.  And with the final splash page, we see that the Sundowners have finally come in together as a “team”, from here on out things are just going to get real. 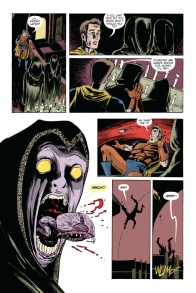 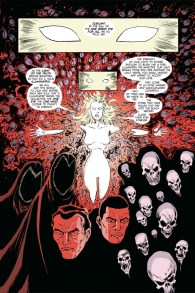 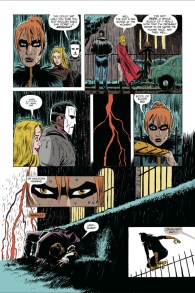