I was really looking forward to The Big Con Job from Palmiotti and Brady because, well, I sometimes get into those very Meta type stories (especially when I get what’s going on).  And these guys didn’t disappoint.

When you crack open issue one of The Big Con Job, you’ll immediately get a Galaxy Quest feel, and that’s fine.  Both stories are about the cast of a TV space opera that has come and gone, but still has its share of cult fans.  Both stories see the cast make the rounds on the convention circuit.  But where Galaxy Quest heads into the realm of say Space Balls (Space Opera Comedy Adventure), The Big Con Job takes a road much more similar to The Wrestler with shades of Ocean’s Eleven near the end.  Yes there is some humor here, but it’s not the focus of this story.  That same, sad, desperation that Randy “The Ram” faced in The Wrestler is reflected here in several of the Trek Wars cast members.  That feeling of chasing the high once the spot light has dimmed or possibly even gone out completely.  Palmiotti and Brady do a really nice job of portraying that reality without stooping to parody.

The Ocean’s Eleven vibe doesn’t settle in completely until the very last page.  Although, with a title like The Big Con Job, you kind of get the idea of where things are headed.  Again, Palmiotti and Brady do a nice job of shining a light on the reality of the convention circuit and what it’s evolved into without parody or any real malice.  Conventions, just like anything else in life, are changing.  Hell, they have been changing for quite a while now.  Every year things are bigger, better, and brighter than before.  And that’s great for the fans.  You can go to the San Diego Comic Con (well, you can if you get a ticket, which is no easy task) and satisfy almost any nerd/geek/pop culture desire.  The down side for talent, be they artist, writer, actor, director, or what have you, is it’s harder to stand out and be noticed amongst all that hoopla.  But Palmiotti and Brady are no strangers to the con circuit so they are able to just peel back the curtain and give us the inside scoop without a lot of prejudice.

Character wise, Palmiotti and Brady nail it with this cast.  Each character is at once familiar yet unique, and that’s pretty cool.  And the art; Man, Domo (can I call you Domo?  I don’t want to seem too familiar, but it’s easy to type Domo) is knocking it out of the park.

I like this book a lot.  It’s fun, and funny, but touching and revealing all at once.  And there is a sadness there that is rooted in reality that is always lurking under the surface.  The surface, by the way, looks really good. 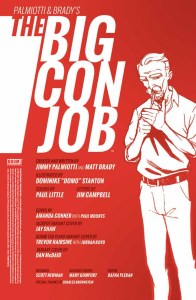 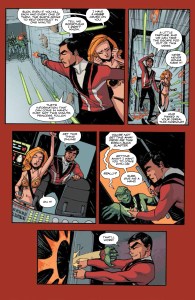 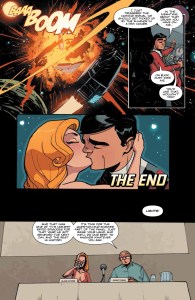