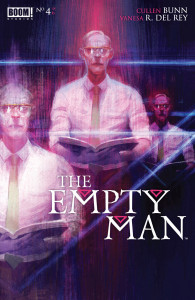 I saw issue #4 of The Empty Man was out this week and thought, “Why haven’t I read the first three issues yet?”  So I totally binge read all four, and holly balls I like this.  I admit it, I’m a sucker for dark, weird stories, and this one has darkness and weirdness in spades.  A famous preacher with dark secrets; a dude injecting himself with fire ants; a scorpion looking alien disease god thing; a disembodied or partially disembodied voice from beyond; and a dead girl floating near the ceiling asking for help to save her brother.  Ok, I think we covered the dark and the weird.

But there’s more here.  I get a definite Mulder and Scully vibe and a pinch of Walker and Pilgrim from Powers off our two main characters.  We get to see some genuine concern for each other in this issue, but of course, that’s cut short by, you guessed it, The Empty Man.  At least I think that scorpion like alien guy with the mouth full of teeth is the Empty Man, or at least his emissary.  And that’s what I like about the Empty Man.  Is it a disease? And alien? A god? Something all-together different?   A little bit of all of that?  I have my thoughts, but I don’t care.  Keep the questions coming.  Keep the weirdness flowing.

Like I said, I read the first four issues all at once, so it’s a bit hard for me to judge this one issue on it’s own, but I dig it. 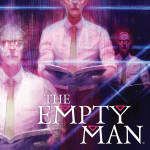 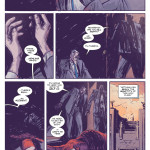