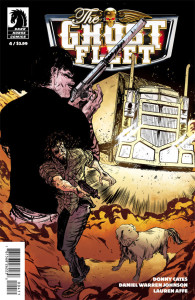 Donny and Daniel remind me of rock’s Toxic Twins, Steven Tyler and Joe Perry; those two make magic.  Just like Donny and Daniel do with The Ghost Fleet.  They lay down solid art riffs over soaring story vocals that just scream rock.

This issue starts off with a nice flashback where we get to see Trace and Ward when they were on the same side of the fence.  We also get to see the why and the beginings of how Ward ended up on his side of things.  It’s kind of like the intro to Sweet Emotion.  Smooth funky bass action with some flange/vocorder action on the guitar.

Then we move to Trace’s current situation, as he’s trying to figure out how Ward’s wife was speaking to him though a wrecked CB Radio.  That’s your slow build with the fantastic harmonies… The Wham!  It’s the drums hit and that classic riff kicks and Trace is assaulted by, we don’t know what but we know it’s some serious business.

Then things kick up even further when Sara reveals her true self to Trace and things are just plain bonkers.  Like when Joe and the boys pause for just a moment and then launch into a killer vamp/solo section to close out the song.  That’s how you lay down a rock jam right there.  And Donny and Daniel are making it happen.

I know, the song is over but the issue isn’t.  That’s because we are introduced to Mickey Reno, Shadow Assassin.  This is a whole new kind of rock.  Mickey is flat out bad ass.  We aren’t sure what to think of him at first, but we know this is again, some serious rock.  Just like when Aerosmith teamed up with Run DMC to redo Walk This Way.  That same raw energy was there, but now there was a different back beat and a slightly different flow in the story.  That’s what we get with the tail end of issue #4 of Ghost Fleet.

These guys continually bring the rock to this hyper violent, paranormal infused, sci-fi, trucker romp, and I continue to dig it, hard.

5 out of 5 Scarf Covered Mic Stands 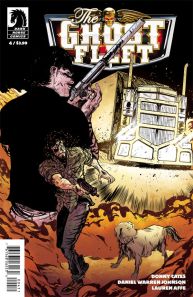 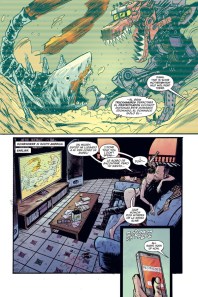 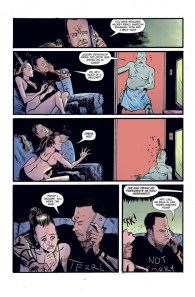 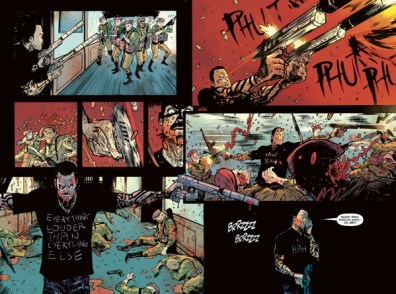 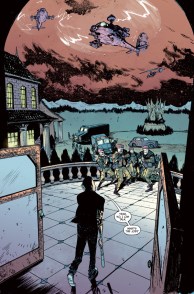