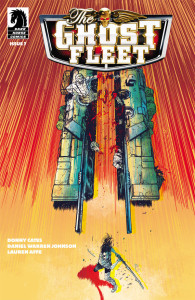 Blown. Away. I mean, like the first time you heard Joe Satriani’s Surfing With The Alien blown away.  Like when Terry Bam Bam Gordy rushed to the aid of former partner Michael PS Hayes to reform the Fabulous Freebirds kind of blown away.  Like finding out Bigfoot is real blown away.  (OK, granted, I haven’t discovered the legitimacy of Bigfoot, but man, if you did, you’d be blown away, right?)  That is what I’m talking about when I read Ghost Fleet #7.

I’m not even sure where to being with this one.  Donny Cates and Daniel Warren Johnson are clicking on all cylinders right now with The Ghost Fleet.  I could start with the fact that we finally find out what the Ghost Fleet was hauling around in the back of that semi for Roland Cohle and his culty friends, because we totally find out what the Ghost Fleet was hauling.  (It’s not what I thought it was going to be.  These boys are good now.)  I could talk about how Trace drives a semi-truck out of the back end of a crashing plane… in the first seven pages.  I could talk about how Ward finally finds his courage, or about how Mickey Reno’s shirt keeps changing/narrating what’s going on around him.  Or I could talk about the Trace/Cohle showdown that’s about to happen at the end of this one.  But telling you about it wouldn’t be doing it justice.

I mean, yeah, I could describe what Joe Satriani is doing on the title cut of Surfing With The Alien, but you wouldn’t get it until you heard it.  And I could tell you about how cool it was to see Michael Hayes run out with Terry Gordy to face the Mad Dog Buzz Sawyer and The Destroyer, but you couldn’t hear the crowd react, or see the faces in the audience, or hear Gordon Solie as he makes the call.  The Ghost Fleet #7 is one of those things you just have to experience.

And I have to say, congrats to Donny for giving Cohle the best line in the issue, and I quote, “Fuck off and shoot straight.”  While I’m not giving you much context, trust me when I say that this one line, while still being all kinds of funny to me, gives you a lot of insight into Cohle.  Taken in context, you really see where Cohle’s priorities lie.  He is of a singular mind, and it’s shortly after making that statement that you understand much more clearly as to why he is so focused.  I dig this book so much.

Donny Cates and Daniel Warren Johnson are building a mythology of biblical proportions here and all I can say when I get done reading their stuff is, “Damn!”  (That’s a legit quote by the way.  Out loud even.  No one was in the room with me either.  I got done with issue #7 and just said, “Damn!”)

5 out of 5 Awkward T-Shirts