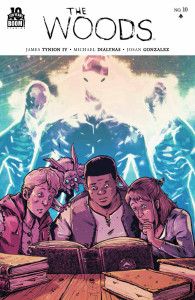 Reading The Woods continues to be like walking through the woods for the first time.  There’s the emergence of light from shadow, the sense of familiar and foreboding all at once, and a sense awe and wonder as you see parts of the woods for the first time.  Walking through the woods can make you feel like there really is magic in the world; reading The Woods can give you that same feeling.

James and Michael are masters of the ebb and flow of storytelling.  In the first major arc of The Woods we got flashes between the kids in the school on the new planet and back at home.  Now we’ve moved to flashbacks that feature the history of the new world and what is happening with the kids.  Also in that first arc, each issue focused on each kid individually, giving each a moment to shine.  As we move forward, it’s much more about the group dynamic and the story of the cliques and how each interacts with each other and their own members.  Like in that first arc, we don’t lose any momentum going between time frames in the story.  This issue has an especially nice dovetailed feel to it as James continues to show us the past as a way to what lies ahead.

There are a ton of really good moments in this issue.  The weird ghostly appearance of Adrian at the glowing black rock is really cool; the interpersonal tension at the family dinner table is both at once uncomfortable and still very relatable; and the foreshadowed last page that is just plain chilling.  And those are just a few.  James is weaving a rock solid story with all the makings of a classic.  And Michael’s art is killing it every issue.

I’ll admit when I ventured into this series I thought, “Man, this is going to be another teen coming of age story only set on a weird alternate world.”  And in a way, that’s exactly what this is.  But it’s so much more than “just another…” anything.  The entire story leaves you with that sense of wonder, and that is a very magical thing. 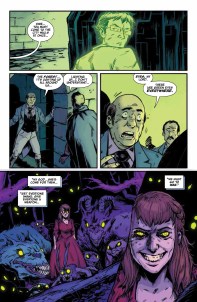 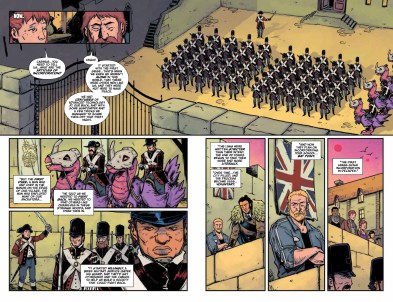