Sometimes, it’s the normal things that let us know just how alien things really are.  That’s the vibe I get out of The Woods #9.

Once again, James Tynion IV teaches us about what’s happening to our current cast of Breakfast Club-esque characters through a flashback.  Of course, this one flashes us back two hundred years, but still a flash back.  We learn a lot about this new world our ragged band of high schoolers have found themselves in.  First: This clearly isn’t the first time that folks from what I can only assume is our Earth have been transported to this alien world.  Second:  At least one person in the group that comes to this new world has a much different connection to it than the others.  Nextly:  Our folks from 200 years ago have managed to establish a new colony, New London, that gives them and the kids a sense of normalcy and belonging.  And that’s where the differences start to show.

These kids are lost.  Well and truly lost.  And we see through Isaac’s eyes just how not ok things are for them.  They are trying desperately to A) get back home and B) make as normal a life as they can.  But being in New London may not get them back to either goal.  I freakin’ love the flash backs in this issue.  Ole witchy poo seems at once bat shit crazy, and also, maybe, just maybe, the only one who truly gets it.  And that’s the same with Adrian.  He’s still out there in the Woods “talking” with the world. It’s easy to see them as crazy, or evil.  But the question remains, are they?  We can see by the actions of the Duke of New London that everyone there isn’t exactly pure as the driven snow.

Man, I can’t say enough good things about how James is pacing this story.  Everything matters here, like in your favorite song.  If the drums are too dominant in the mix, or the vocals too buried, or if there’s too much cowbell (Ha! Who am I kidding; you can never have too much cowbell.) Then it can mess up the whole works.  There’s the rhythm and flow, the instrumentation, the effects on the instruments, the eq, the vocals, the lyrics themselves.  There’s so much going on in a really good song, and Mr. Tynion IV is producing like Mutt Lange.  (You know, Mutt Lange.  Married Shania Twain… Produced some of Def Leppards’ biggest albums.  He knows how to mix it up and make it work just right… kind of like James is doing here… Did any of that make sense?)

And Michael Dialynas continues to bring it with his art.  The flash backs rock.  The creatures are awesome.  New London seems practically idyllic.  And you can feel the hurt, rage and betrayal in Isaac’s eyes.  I’m really digging this new arc, and I hope we get more of the Flashback People in future issues. 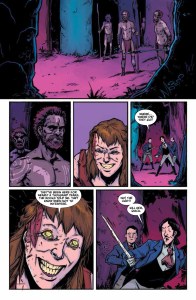 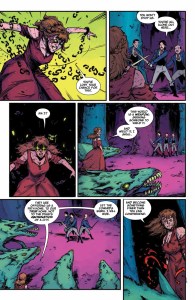 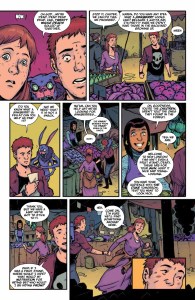