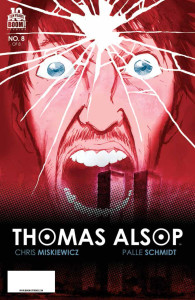 This has been one of the most satisfying story arcs in comics that I’ve encountered in a really long time.  Fun, funny, crazy, bold, edgy, fantastic, honest, human, tragic… I could go on.  Thomas Alsop has become a very real person in just eight issues, and I’m sad to see it end.

What can I say about this series?  I’ve been pretty open about how much I’ve liked it since issue one, and man did Chris and Palle bring it home with a very touching and tragic final issue that still has that Alsop swagger.  Mr. Miskiewicz has crafted an amazing story about, well, a lot of things quite frankly.  But for me, it’s about faith.  I don’t mean this is a subliminal Christian allegory, I mean about faith and belief in ourselves, and each other.  Thomas needed to heal the Island because it was the right thing to do.  In spite of the setbacks and roadblocks and the risk to himself and others, he never wavered from his mission.  That takes faith.  (Or call it belief, willpower, whatever you feel comfy doing, at this point this is your internal monologue, so edit at will.)  In order to do so, he needed help from his friends.  They had to trust him to get the job done.  Thomas also needed actual faith from his viewers to fuel his spell.  That’s a lot of faith/belief/willpower/whathaveyou.  The point is, they came together in a belief that something good could be done, and lo and behold, it was.  That’s just plain cool.

Chris could have ended his story there and it would have been supremely satisfying, but he didn’t.  We always knew there was more to Thomas than the braggadocios yet charming supernatural scamp he portrayed to his viewers… much more.  We’ve seen Thomas grow throughout this series, but in this final issue we see a deeper layer that had yet to be exposed.  Turns out, this is what has been fueling him all along, even if he didn’t realize it.  And, man, it was just plain tragic.  My heart actually dropped when I realized what was up.  (No, I’m not going to tell you.  Read this book!)  Man.  Chris.  That was awesome.  Sad and awful, but awesome.

Palle Schmidt continued to bring the story to life with exuberance and fervor that Thomas deserved.  His first and last pages on this issue were just gutting.  Well done sir.  Well done.

Man I dig this story.  And I’m sorry it’s over.  There is clearly plenty more story for Thomas and the Island.  I just hope Chris and Palle don’t make us wait too long to find out exactly what they are. 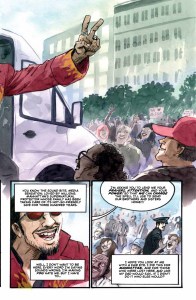 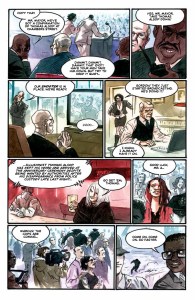 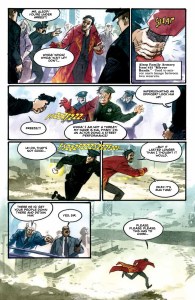