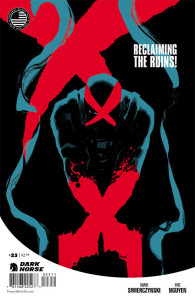 Reading X is like riding (insert your favorite thrill ride here).  You can’t just casually open the cover and leaf through an issue of X.  There’s too much going on.  You need to brace yourself, psych yourself up, and get ready for a full frontal assault on your senses.  This is a book that takes you to the edge and doesn’t bother slowing down as it blows right past that edge.  It’s a rush; it’s exhilarating; a little frightening; and so damned satisfying.

More than anything for X, his past has shaped his present and his future.  He is constantly trying to atone for past sins.  And we constantly see X’s past come back to confront him.  And in this issue, we see that yet again in more ways than one.  He’s revisited by not one but two different characters he’s encountered before in the form of Maureen and the leader of the Swine Revolution.  But we also get a cool flashback that explains not only how X lost his eye, but gives us a bit more insight into X and his driving force.

It’s that driving force behind X that makes every issue so compelling.  There is a desperation within him that that is palpable.  The way he constantly flings himself into every situation with seemingly reckless abandon is at times frustrating; because you would think that he would occasionally be a little cautious; but also satisfying because it relays his deep, desperate desire to make things right.  The story telling is so raw and open I can’t help but be drawn in.

With all this action, violence and aggression going on, it might seem odd that Duane manages to work in some solid humor amongst the chaos.  It’s not over the top and it’s not prevalent, but it’s there.  The humor that Duane peppers in seems so natural and unforced that it grounds and humanizes all the crazy while living side by side with it.

Eric, as always, makes all this crazy look amazing.  And yes, once again, Duane and Eric have managed to make me cringe with the visuals.  This time it only took five pages to make me flinch.  Because, I’m sorry, but a hypodermic to the eye ball… damn son, that’s just, yeesh!  Creeped me the heck out.  So congratulations guys, you’ve done it again.  And please, don’t stop. 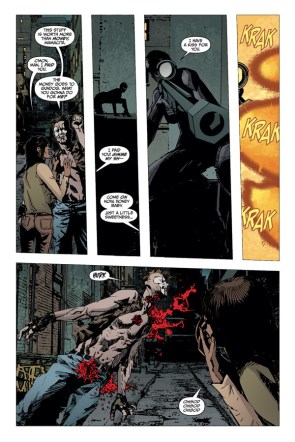 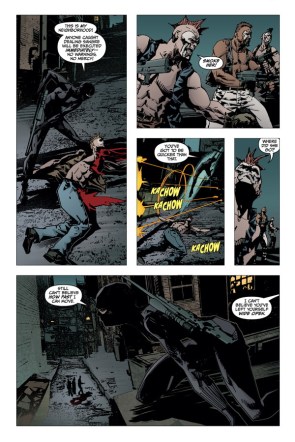