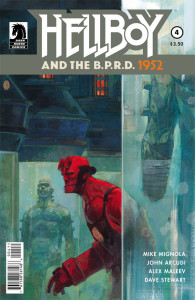 The man behind the cyborg monkeys revealed.  Not gonna lie that was far more satisfying to type than I imagined it would be.  It’s also accurate, so there’s that.

We’re only four issues into Hellboys first mission with the BPRD, and already, he’s looking like a pro.  He’s neck deep in the thick of things and not at all timid about wading further in while still swingin’ that big ole whammer.

Ok, so I feel like I’m a little behind the game on this one.  Even though I’ve read all four issues of Hellboy and the BPRD, I haven’t written about it once.  I’m not even sure why.  I freakin’ love this series.  I think part of it was I didn’t want to come off as a gushing fan boy because, well, I’ve been known to be a gushing fan boy about Mike and John’s work.  Granted, it’s all completely warranted because they rock, but it did give me pause.  But not anymore.  This book is rockin’.  It’s crammed with all the things I dig about Hellboy and the BPRD.  It’s dark, it’s funny, it’s trippy, and anything could happen.  Besides, cyborg monkeys.  (And the cyborg monkey in the lab with the cigarette hanging out of his mouth was killin’ me.)  Besides, there’s an evil Nazi head in a jar riding on a cyborg Frankenstein.  You don’t see that every day.

Alex Maleev is crushin’ it.  I mean completely crushin’ the art on this book.  I’ve already talked about the cyborg monkeys and the Nazi-Head-In-A-Jar guy, but his Rasputin is flat out wicked.

So let’s recap: Cyborg Monkeys; Super Trippy Bad Guy; Flash-back Rasputin; Hellboy fighting one armed zombie Frankenstein monsters (technically I didn’t mention that before and I totally should have because it totally rocks); Alex is crushing it; Mike and John continue to kill it with twisty turny intrigue, action and mystery.

Cameo by Varvara. Love it.  (At least I assume it’s Varvara.  If not, ignore me.)  And by the way, the man behind the cyborg monkeys, the Nazi-In-A-Pickle-Jar dude.